An important message from the Bob’s Red Mill team. View Oats have been around virtually since time began and pack quite the nutritional wallop. However, oats didn't start to get cultivated for consumption and use until about 1000 BC.

Originally, oats were fed mostly to animals and shunned as "barbarian food" by ancient Rome and Greece. Eventually, however, the Roman empire fell and tribes that did consume oats passed on their knowledge and heritage to the rest of the world.

Oats began to be more routinely incorporated into the human diet and today are used in everything from puddings and baked goods to oatmeal porridges. 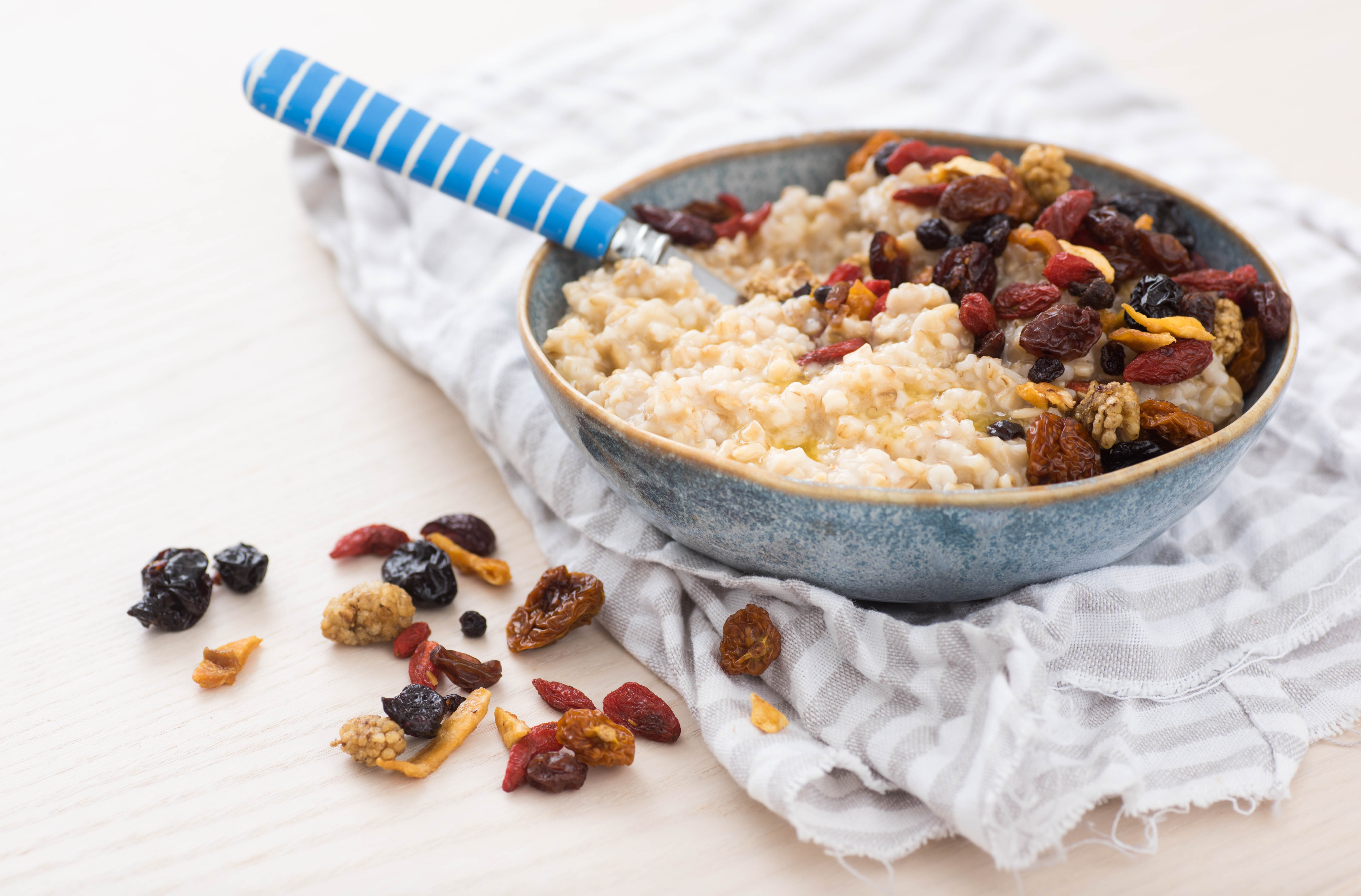 Oats are considered a "whole grain" and are chock full of valuable nutrients and soluble fiber that are good for the body. For this reason, oats are a great way to increase your intake of dietary fiber. An oat kernel, also sometimes called an oat groat, is made up of three distinct parts: the bran, the germ, and the endosperm.

"Oat groats" are simply a whole grain oat kernel with its husk, or chaff, removed.

When discussing steel cut oats, they are basically oat groats that have been sliced with a steel blade into two or three small pieces.

Steel cut vs. rolled oats have a chewy, heartier texture. Because of their distinct shape, steel cut oats must be simmered or soaked for longer, so that they soften up enough to eat.

The Nutritional Value of Oats

All types of oats can be a significant contribution to a healthy diet, especially for people who may have heart concerns or that suffer from ailments like diabetes.

The nutritional value of oats is significant and offers many health benefits, such as lowering bad cholesterol levels (LDL levels) and decreasing your risks of developing heart disease. Oats can help decrease high blood pressure, as well as lower your risk of developing type-2 diabetes. This is due to the high content of soluble fiber that is found in oats, especially steel cut oats.

If you struggle with weight gain or with losing weight, the high fiber content can also help you feel satiated for a longer period of time, reducing snacking and your overall caloric intake for the day.

Steel cut oats, rolled oats, and even instant oats are all fairly well-balanced in their nutritional makeup. Oats are made up of roughly 66% carbohydrate, 17% protein, 11% fiber, and 7% fat.

One of the healthiest fibers found in oats is a fiber called beta glucan. In low concentrations, beta glucans are unique in that they form a gel-like substance that seems to lower cholesterol, reduce blood sugar and insulin levels after eating carbohydrates, and increase the excretion of bile acids.

Beta glucans are thought to be associated with a myriad of health benefits, and it's what makes steel cut oats vs. rolled oats or instant oats so much more desirable.

There are different types of oats. Though their general makeup is very similar in terms of nutrition, the way they are processed and made ready for human consumption varies.

Instant oats, though they may be somewhat beneficial, are the most processed of oats and contain the least amount of fiber per serving.

These are the oats used in prepackaged instant oatmeal. Though this type of oatmeal is popular, it can easily become mushy the longer you cook it, and most brands have added salt and sugar that makes them the least healthy choice when trying to increase your grain intake.

The next step up on the health ladder is "quick cooking" oats. These oats have been rolled thin and cut into small pieces. This is so they will cook faster while still retaining most of their nutritional value. These oats are often used to make oatmeal as well, and can also become somewhat mushy in texture if cooked too long.

Rolled oats, sometimes referred to as “old-fashioned” rolled oats, are oats that have been harvested, steamed, and flattened between rollers. Rolled oats are the same oats that are used to make quick cooking oats, and they are also great for use in cooking and baking or adding to things like yogurt and smoothies.

You can prepare them with water or milk, and the resulting texture is soft and creamy. Rolled oats tend to keep their rounded shape and are frequently used in everything from cookies to granola bars, cereals, and breakfast bowls.

Steel cut oats are sometimes also called Irish oats. These oats are coarser, and the kernel of the oat is cut into only two or three pieces, using a steel blade. This is where they get the name "steel cut."

These oats take longer to cook and may require some soaking beforehand. Steel cut oats are often used for porridge and cut oatmeal. 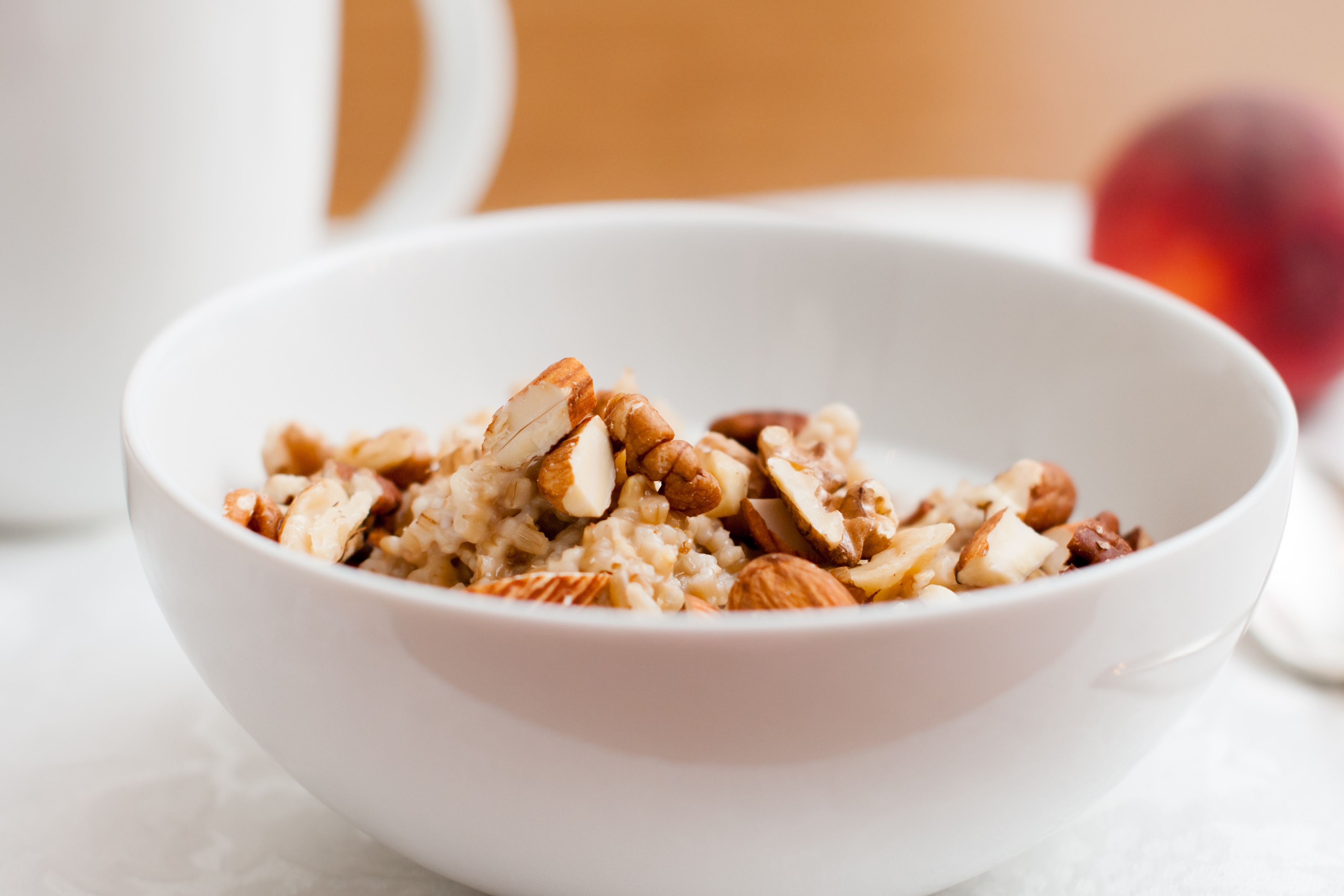 When it comes to nutritional value, metric by metric, steel cut oats are very similar to rolled oats and instant oats. The differences lie in the dietary fiber content of steel cut oats, as well as their density. The ratio of liquid steel cut oats is cooked with is higher than that of rolled oats, so the portion is larger. This means you can eat less of them and reduce your caloric intake, but still get the same level of nutrition as you would from rolled oats or instant oats. Plus, the density of the oats helps keep you feeling full.

Another benefit of steel cut oats is that they take longer to digest, reducing their glycemic load. Because of how they rank on the glycemic index, they are great for people who suffer from diabetes, or who may be prediabetic. This is because unlike rolled oats, they don’t cause a big spike in blood sugar when eaten.

When someone consumes foods that are considered low glycemic, it means that the rate the sugar is introduced to the body has been slowed down considerably. When someone consumes foods that are high on the glycemic index, it makes their blood sugar levels and insulin levels shoot up quickly. This causes cravings for even more sugar when the glucose levels begin to drop.

When cooking steel cut oats, its is important to know what you're consuming. Steel cut oats are low calorie, weighing in at only 170 calories per 1/4 cup serving of dry oats. They contain about 3g of fat and are low in saturated fat. They also contain no cholesterol and no sodium.

Steel cut oats provide 5g of fiber per 1/4 cup serving of dry oats, which is about double the amount of fiber you can get from rolled oats.

They contain 29g of carbs and also provide a healthy amount of calcium, magnesium, iron, antioxidants, and B vitamins. They also provide 158mg of potassium.

As you can see, there are a variety of reasons why steel cut oats make a wonderful addition to a healthy and balanced diet.

The nice thing about steel cut oats is you can dress them up in several different ways. You can prepare them with water or milk and add a sweetener or spice of your choice to jazz them up. They are also great for a quick breakfast like overnight oats.

If you really want to ramp up the nutritional punch, you can also include nuts, dried fruits, fresh fruits, and even things like chia seeds and Greek yogurt into the mix. No matter how you prepare them, you can't escape the goodness!

This site uses Akismet to reduce spam. Learn how your comment data is processed.

Gluten FreeRecipesVeganHealthQuinoaGMOVegetarianWhole GrainsWhat is it? WednesdayPodcast
Keep up to date on the latest from
Bob's Red Mill
Subscribe Now