Nutritional Information & Ingredients
Our Pearl Barley has had the bran partially removed, resulting in a quicker cooking time. It is a hearty grain that is great in risottos and soups, including classic comfort food dishes such as vegetable barley soup and beef and barley soup. Contains gluten.
Why Customers Chose Pearl Barley
Description
Pearl barley, one of the world's oldest and most treasured cereal grains‚ is used by cooks and chefs around the globe. In fact, it's the fourth most cultivated cereal grain, behind corn, rice and wheat. Barley flour is also popular, but take note: while barley is not wheat, it does contain gluten.

Pearl barley is created when unhulled barley is polished, removing the inedible coating and creating pearled barley grains with a smooth surface and quicker cooking time. It shouldn’t be confused with pot barley, which is polished for a shorter amount of time and retains more of the bran.

However, hulled barley grain retains significant amounts of fiber, which can help stabilize blood sugar. Barley contains dietary fiber (both insoluble fiber and soluble fiber) throughout the entire kernel, and not just in the outer bran layer. Barley also contains B-complex vitamins, protein, calcium and iron. One 1/4-cup serving provides 32% of your daily value of fiber. Plus the chewy, al dente texture and delicious flavor of cooked barley are downright addictive.

Pearled barley is very versatile and lends itself to a variety of dishes. Add pearl barley grain to soups, stir fries and stews in place of rice for a tasty change. It can also be cooked up as a hot cereal, stirred into salads, or used in stuffing. The mild nutty flavor and tender chewy texture is also wonderful in pilaf or risotto. Pearl barley risotto is a big favorite here at the mill: the firm bite of the grain lends itself perfectly to this classic Italian dish.

Another traditional use for barley is barley water, a popular drink in Greece, Britain and Asia. It’s sometimes sweetened and flavored with lemon.

See the back of our package for two scrumptious recipes with pearl barley—Pearl Barley Salad and Chicken Soup with Barley. Customers tell us our hulled barley is a great addition to our Vegi Soup Mix. Or, try our pearl barley grain in Scotch Broth, the quintessential Scottish soup made with pearl barley, lamb and root vegetables. The options are bountiful. To learn more about how to cook pearl barley, click the recipe tab above! 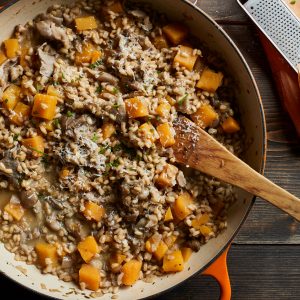 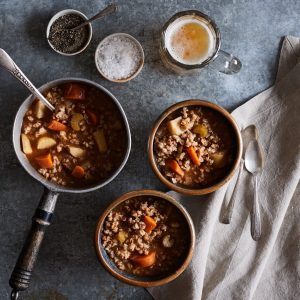 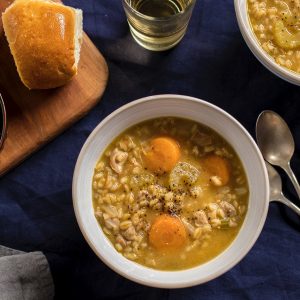